So many builds out there take advantage of vampire or werewolf but there are two major differences between the two skill lines “generally”. Most of the time people pick vampire for the passives, barely use the skills, and just take the recovery, reduction to damage, and of course the sneak bonus. As a werewolf, however, you go FULL  out dog mode and use all your skills until the werewolf runs out or someone kills you. I kind of wanted to make the most of the vampire for once and actually find a way to utilize it not just for passives but to actually play AS a vampire. Taking full advantage of the skills and passives combined, as effectively as possible.

Now, this WAS the case for about 3 years (since the build’s original release) but NOW we have a FULL vampire rework thanks to the Greymoor chapter update on the skill line! 5 new skills, new passive changes, and much more fun and active vampire role IF you know what you’re doing!

The vampire traditionally recovers from killing, feeding, etc. Yet our health regen in this game is low…so I had to find other ways to make you stronger.

The drain ability itself does a decent amount of healing alongside ultimate gain…so replenishing so building for the Scion ultimate for your bats is pretty easy to do, allowing you to hit god mode much faster and devastate your enemies with ease while being incredibly hard to kill. Healing from everything you do and having huge heightened resource stats for 20 seconds.

However with the sets and traits combined alongside some useful passives and of course class…I have managed to adapt to this mindset of “the more you kill the stronger you get” by massively reducing the cost of abilities and ultimate in order to allow you to gain so much back from being in combat that you can almost spam yourself replenishing abilities at the same time as killing things, making you very powerful!

We have introduced a lot of new skills from the vampire skill line and have also taken advantage of FRAGS! Yes, frags, I never use them on my builds BUT you have a 35% chance to make the ability 50% cheaper and insta cast! now while our base abilities cost more being a vampire, our vampire spammable is amazingly cheap, not to mention mist form only costs us a little under 500 to cast and can ALSO make it proc. Meaning cheaper spammable as such for devastating effects 😉

The sets and passives combined allow you to gain ultimate very fast in order to not only kill things in AOE, BUT stay alive while doing so. If you are hit, you can gain ultimate, if you kill you can gain ultimate, for light and heavy attacks you gain ultimate, for the drain ability you gain ultimate, and all of the ultimates (and vampire abilities) are reduced by the combination of skills/passives and the armor. So the more you get stuck in, the stronger you are. With this overall setup the way it is put together and calculated…your bat swarm Scion transformation ultimate costs a small 148 ultimate!! over 9 seconds from just one undead player kill+ combat itself with all procs bells and whistles combined you can gain over 92 ultimate…meaning in a zerg, you can keep bats going for a LONG time while doing crazy aoe damage and staying alive!

Some bonuses to this setup:-

So keep your buffs up, activate that proximity detonation…and when you are about to pop, hit bats, pop an early Mage’s Wrath (pops at 20% hps) light attack, and then pressure them hard with invigorating drain.

Tanky targets take a little more, but soft targets do NOT see it coming and by the time they break cc, they are usually dead. If they break loose just repeat..keep buffs up and pressure them like hell until they pop spam that drain until bats ultimate is ready again! rinse repeat.

Be sure to keep knocking out light attacks between skills for your weapon procs (spell damage etc) and if you run low on resources, get out with mist form, pop a healing ward or two, and heavy attack with the resto/lightning staff for huge magicka return.

This is a lot of fun solo but mostly fun in a group of equally annoying builds! take maybe 3-4 of these, + one healer and you will take out armies:)

You are most welcome! and enjoy!:)

Food is very simple, the highest level food you can consume with 2 stats only, MAX health and MAX Magicka. There are 3 variations of recipes but all are the same in the stats they give so your choice of which one you use.

We are using the Lover Mundus stone with this also to make sure we get plenty of penetration before buffs are applied to go through the target’s resistance, increasing our overall damage.

All 64 Attribute points go into Magicka.

We are a High Elf but other races are also usable. Breton, or Dark Elf are good substitutes. 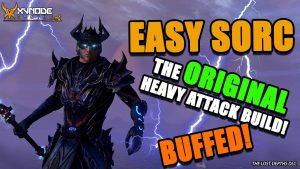 Easy Sorc – Magicka Sorcerer PVE Build Written guide and video updated for The Lost Depths DLC: Q3 2022 https://www.youtube.com/watch?v=3jPk6VTQNzU EASY MODE! That’s right, the easiest to use Sorcerer build in the game built with quite possibly the highest AOE available, with solid sustain and survival. This is built for 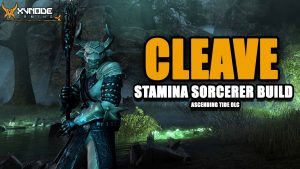 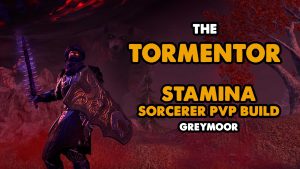 Tormentor – Stamina Sorcerer PVP Build Written guide updated for The Lost Depths DLC: Q3 2022 Older video but still relevant. The Tormentor, the Stamina Sorcerer PVP build for the Elder Scrolls Online: Greymoor Chapter is now up to date!  This build is made to make the most of the