The Magicka Nightblade known as ‘Flawless’ for the Elder Scrolls Online is finally here!

I waited a LONG time to release this but now you can have it, i feel that the nightblade has had so many changes over a short period of time, there is not much more “balancing” left to do for a little while now.

So, how does it work and how is it designed? There are many “crit builds” out there that are not REALLY “crit builds”. They just tend to have SOME crit and rely on chance slapping enemies all day and having varied results because of the inconsistency of the stats. Sure it “works” but also open to lots of fluctuation.

ZOS Noticed how easy it was to stack into critical damage bonuses and critical chance bonuses without really designing a build specifically for it, and decided that simply having one trait and a mundus stone with not a single crit chance bonus in your sets, was WAY too easy to achieve, deleting balance/choice/options from even being a thing. It’s the base design of teh game after all right?
Of course, they decided to make crit chance more of a “build for it, or don’t” scenario. Now if you want SOME crit chance, well that is just fine, but if you want a specific crit play style, you have to build for it… Well, with that in mind, that’s EXACTLY what we have here!

Not a little, not some, not a lot…PURE CRITICAL CHANCE! Or for want of a better term, CONTROL of your build making that “chance” actually consistent rather than random!

All you need is a minor prophecy buff from one Sorcerer in the group using a dark magic ability once every 20 seconds (surprise yes, group composition was considered 😉 ). If you have this, you will have 99.9% critical chance on your front bar ALL of the time!

This means it lives up to it’s name ‘Flawless’ because it can FLAWLESSLY critical hit on the front bar at ALL times (sure there is a 0.1% chance to fail, but so far, i have never failed).
Lets say that again, NEVER fail a critical hit on your front bar!

MOST “crit builds” have about 60-70% crit chance. Sure their base maybe higher so they can crit harder IF they crit, but they crit much less often than us and open up to literally RNG controlling their ability to have a good and bad day.

The way this build is designed, we have guaranteed control over our damage numbers for MUCH more accurate and consistent results!

Most critical builds like to pack heavy into critical damage, but again we have the same problem. You COULD fail…we cannot.

This means our critical DAMAGE passives/skills/bonuses are no longer chance based, instead they are literally constant passive bonuses, staying with us on our main damage bar at all times!

We have multiple sources of critical damage that all stack together to give us big bonuses to damage WHEN we crit (which is always).

Usually if you spec for critical chance but don’t reach 99-100% you will open your self up for failure while having low flat.

Of course flat stats do increase the base of your abilities but when they crit they are higher right? Yes but if you fail then…it’s a waste. We sacrifice a bit of flat but we plug the gap with multiple HIGH critical damage. Usually that would be open to chance, but since it is not… our critical damage IS our “flat”

Your back bar has 2 dots, that’s it! (unless you alter). Stay on that front bar as much as you possibly can!

The back bar has HIGH (very high) crit chance, but your front bar is where it all happens.

Not only this but we have stupidly high ultimate regen so long as we get kills. We have guaranteed critical hits with our execute. Get to killing! and spam those ultimates!! 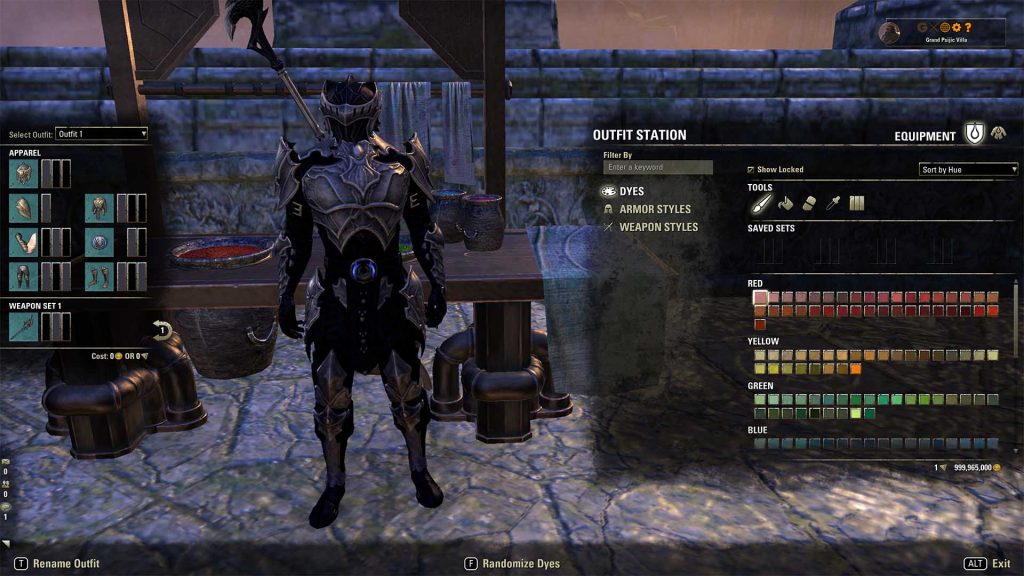 As demonstrated in the video, our fabulous ESO fashion setup and dress choice for this character is as follows:-

As for dyes, pretty much everything is Void Pitch Black and Warrior’s Steel!

If you are lower than maximum champion points do NOT worry! This will work no matter what and of course the more cps you get the more effective it will be, however some hints on what to do at lower cps. I get questions about 300cps, 401 cps, 12 cps? we could be here all day but here are somethings i personally would recommend to prioritize in your damage areas..

Firstly be sure to get 30 points into Elemental Expert, this will allow you access to the critical chance passive and give you a good base for Magic/shock/fire/ice damage across the board. Then get 40 points into Thaumaturge to start getting that dot bonus for your skills bonus before then pushing for master at arms and Staff Expert. . After that push for piercing while evening out your cps until you hit maximum.

As far as the resists are concerned (red trees) get 15 points into quick recovery asap for the res bonus passive and then from there BALANCE your resists between hardy, elemental defender and thick skinned until you have a good even base and just drip them in boosting it as you go until you are maxed.

For the green trees be sure to spread tenacity and Arcanist as evenly as possibly and boost them both to 75, then after work on dodge roll costs (tumbling) and break free costs (warlord).

Note your first rotation will be winding up the bow procs, the rotation below is considered as something you should repeat after your FIRST one is in full swing.

Be sure before any fight that your Merciless Resolve and your Siphoning Attacks (if using it) are ready. This is all explained in the video also for reference with a time stamp in the description.

Siphoning strikes: If you are using it (some people may not need to) be sure to cast it between Unstable wall of fire and twisting path ONCE every SECOND rotation.

Mystic Orb/Consuming Trap: If you are using this and you can sustain it (optimized situation for you resource wise) be sure to use it like Siphoning strikes but EVERY rotation.

During Execute: Replace your Swallow Soul with Impale (ONLY under 25% health) and do not fire your bow anymore to keep up the 10% critical damage bonus!

Sustaining + keeping up your Spectral Bow (Merciless Resolve) procs:
Remember 1 light attack counts for one bow proc, 1x heavy attack counts for 2x! IF you are struggling with sustain…Replace 2x light attack, Swallow Soul with 1x heavy attack Swallow Soul. This will keep your timing and rotation on point along side of your sustain IF you are struggling! And remember, you WONT fail to crit on your front bar…so, heavy attacking is still hitting hard!

Potions really help a LOT. Spell power pots are ONLY useful for this setup IF you are using Structured Entropy instead of degeneration. If not, Tri pots ALL day long!

We are using the Thief mundus stone. All 64 points are into Magicka

We are a Khajiit but other races are also usable. High elf, Dark elf and Breton are good substitutes.