Crypt Of Hearts I Dungeon Guide

This is one of the first dungeons you have access to at level 22 or if you travel to the opening yourself at lower levels. This is located at the South East of the Rivenspire map as shown below left.
The bosses are marked on the map below right with their names and locations. I shall explain their mechanics as well as what you should and shouldn’t do while facing them. 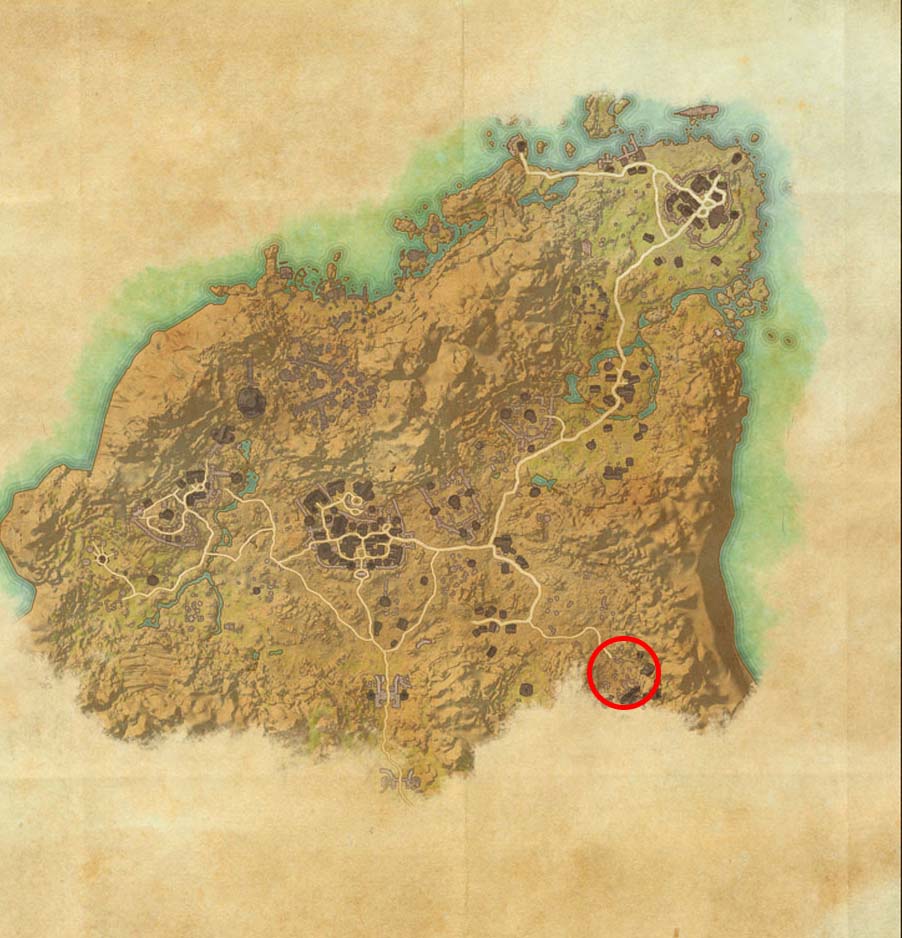 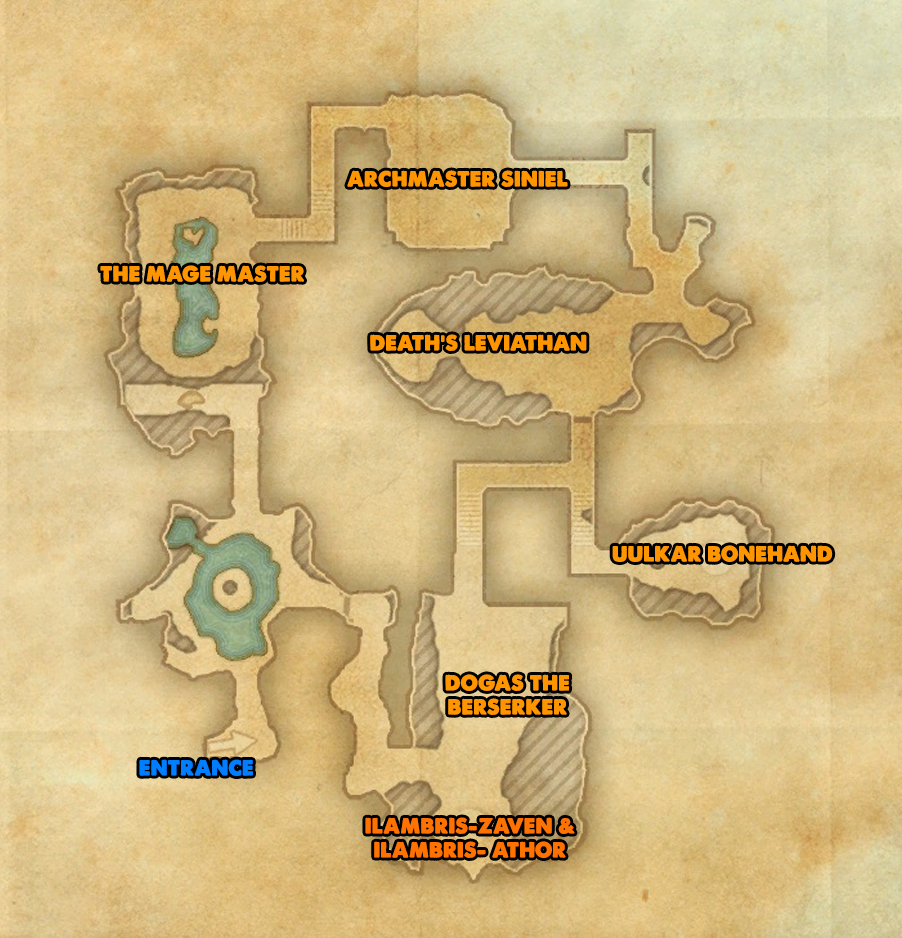 This boss is very simple. He has 4 mage type enemies with him which must be controlled by the tank from the very beginning so they don’t run around. The dps and healer also need to pay attention to interupts so don’t run around the room, relax and stop them from doing anything stupid. The tank should hold everything as still as possible through out the fight and chain in any adds that try to run away.

Heavy attack – This is a pretty simple melee attack in the form of an uppercut and must be blocked. Any role can block this but it will only hit whoever is agroed (mainly the tank unless the taunt has droped) It does a lot of damage if NOT blocked, but if you do block it, it doesn’t hit too hard. Don’t miss the block though else you will get knocked over.

Elemental Ring – This is donut shaped aoe on the floor usually making the tank sit in the middle. Inside of it and outside of it is the safe area but if you tough the edges you will take a fair amount of damage, so avoid standing in this for long periods of time.

Negate – usually after the previous effect he will drop a negate bubble on top of the same aoe. So this is the trade off point. if you are dps or healer make sure you are out of it, but as the tank, if you tough the edges, you take damage, in the middle is safe but NOW you are in a bubble which means you have two choices…take damage and leave the bubble, OR stay inside, hold a taunt and block and rely on your healer. The reason you will now be relying on your healer is because INSIDE the bubble you CANNOT use any magicka abilities until it has gone. Stamina abilities, heavy attacks and blocks work, but you magic abilities will not. PLay it however you are comfortable. 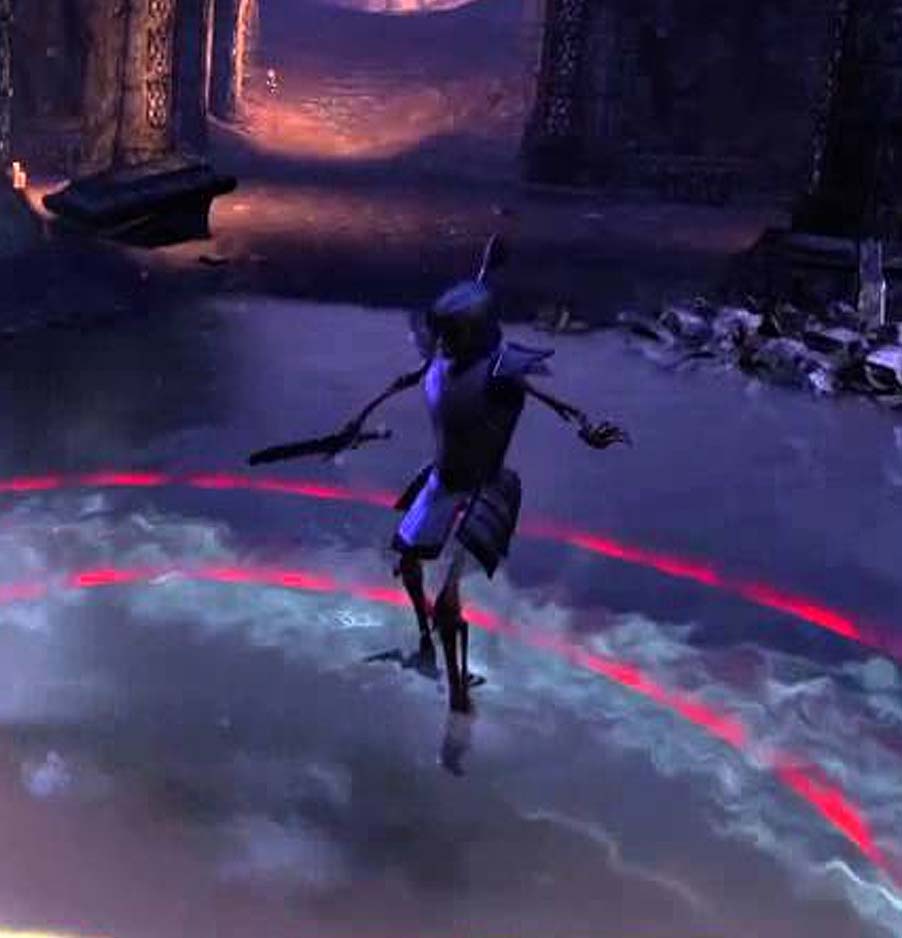 This boss is so much fun but can get incredibly chaotic if people do not pay attention. This fight is all about the tank controlling the boss. If the tank looses control of this boss it is all out mayhem and very hard to get damage on the boss let alone survive his enrage mechanics. This can be really simple or really difficult. It’s up to you!

Charge – This is where your tank has to position the boss so that he can stay in the damage and not run around the room. When he charges he will go in a straight line aiming in the direction he is FACING at the time. So get your tank to position their back into a corner so that he runs straight at the wall. Every time he has finished charging move to another corner close by and repeat the process.

Burst – After the charge ability he will stamp the ground and creat a fast growing large BURTS aoe. This can be blocked or dodge rolled and is very easy to spot. The damage is not so bad at this stage but you need to avoid it none the less. for dps, simply dodge roll out and then get back in when it is gone.

Enraged – At low health the boss will buff himself with FIRE! His charge ability now emits a massive fire trail wherever he ran from and to, so do NOT stand in this. Also his burst ability now has an added fire damage burst to it. You can still block and dodge the initial damage BUT the second tick of damage will still hit you and you will be knocked over regardless. So be sure to avoid/block this as best you can or it will wipe you out. 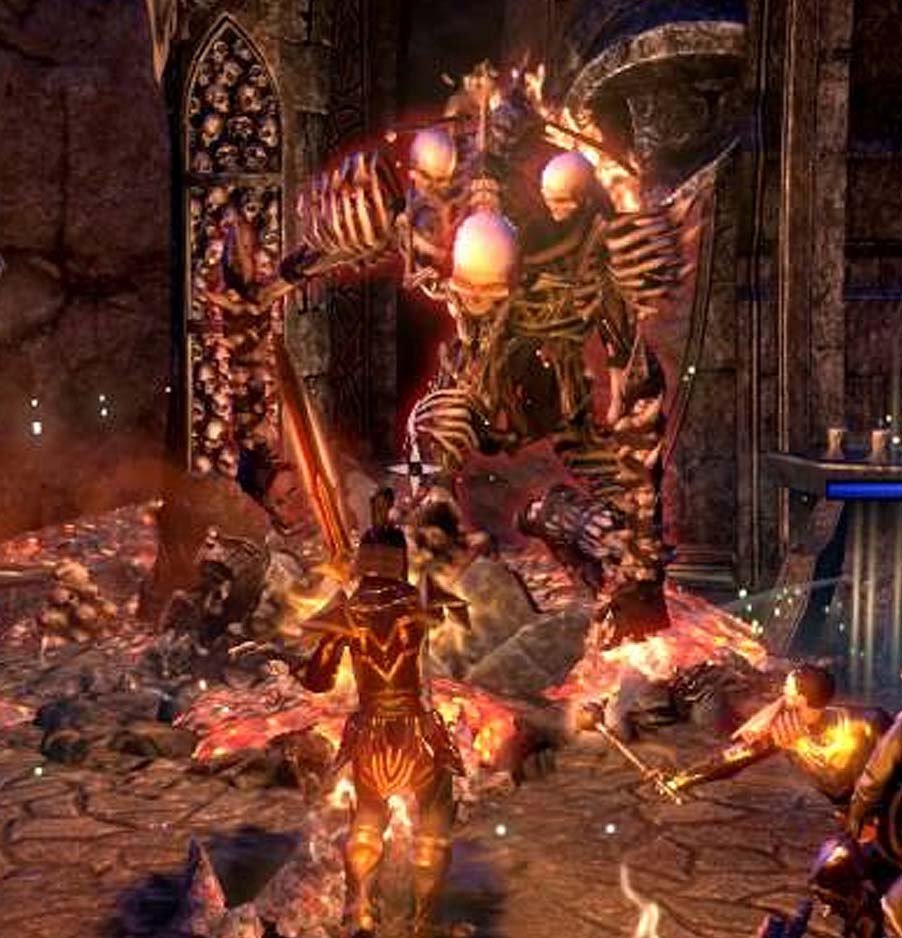 The Boss is very but CAN wipe a group if you are not paying attention to BASIC mechanics of the game. The tank should turn the boss away from the group and hold on to the two adds while the group burn the adds with aoe damage.

Whirlwind – Every so often the boss will spin his weapon around his head in a small aoe damaging people inside of the circle. This is a very simple mechanic, stand out of it and you will not be harmed.

Heavy Attack – The simplest mechanic in the game for a tank to put into practice…This heavy attack requires you to BLOCK. If you do not block you are dead! The wind up to this heavy attack can actually hit JUST before the attack connects so be sure to look out for this and block early.
A tank, dps or healer can block this and it will do hardly any damage what so ever, but if you fail to block it is a guaranteed one shot! Pay attention! 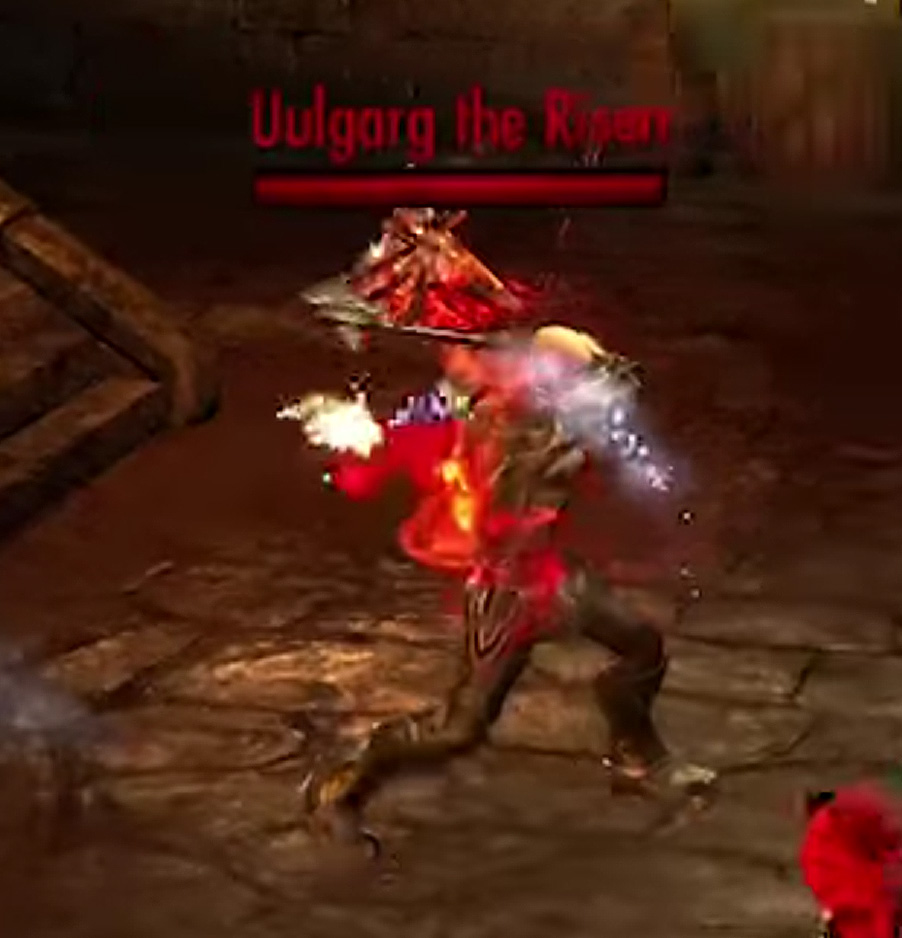 This boss is very small and has under 1million health. A high dps group will make mince meat of this guy but we are here to learn about mechanics so of course i shall explain what to do. Your tank has to be on his/her toes on this one since there are a lot of enemies to manage. Grab all the adds(pin them or taunt them) and hold a taunt on the boss. Keep the boss central so the group can kill everything in aoe as fast as possible while focusing single target stuff on the boss.

Heavy attack – very so often the boss will aim a heavy attack at the tank(or whoever has agro) this has a nasty knock down and a lot of damage so make sure you block it! Also this can sometimes be done from stealth so be sure to keep your eyes open for the heavy attack sparks effect in thin air if he vanishes and block EARLY.

Soul Teather – Very much like the nightblade ability, the boss will occasionally stun the group and then life steal each member for 4-5 seconds. The stun can be broken free and you can block the initial damage. 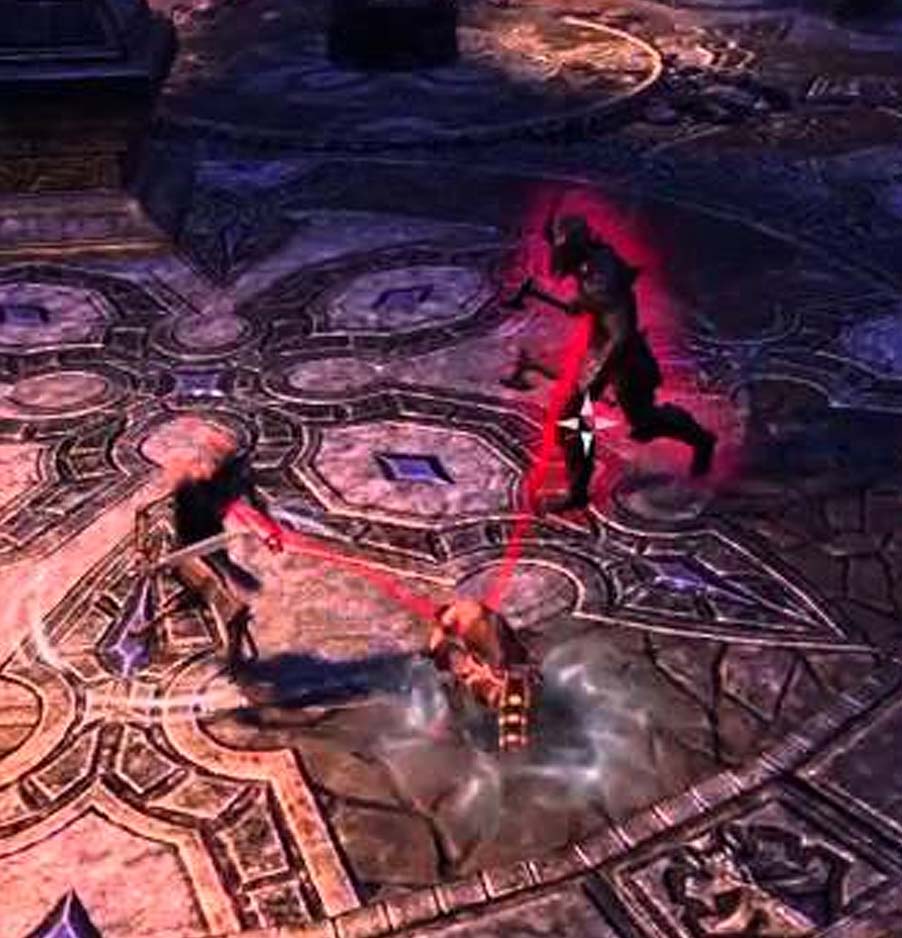 The final boss in Crypt of hearts I is Actually two bosses at once. Killing one will enrage the other so you CAN kill them both together if you have a lot of damage but this is about mechanics so i will explain how i personally would do this as also descripbed and demonstraited in the video. Get the tank to hold The blue boss with the two hander out of the center circle, and keep a ranged taunt on the red mage boss. This way all the damage will go to the tank excluding aoe damage. This will make the fight MUCH cleaner. The dps should focus the mage and then once it is dead , put the blue one in his place and hold him in the middle. The dps and healer will need to move form mechanics in this fight but do NOT sprint around the room!

Heavy attack – The heavy attack is HUGE, does a lot of damage, a massive knock down and is delayed. This MUST be blocked BUT block the second you see it. It will connect with the target before the visual for the swing actually happens so keep your eyes peeled and block as soon as you see this. This should always be on the tank but if something goes wrong the dps can survive it IF they block. If not, they are dead. Also during the fight and between heavy attacks a lightning dot will be cast on the tank. It does barely any damage.

Bubbles – occasionally during the fight Athor will cast tiny lightning aoes on the ground with a small dome covering them. Do NOT stand in these they hit you with a nasty amount of lightning damage. No need to panic, they dont move. Just stay out of them.

Enrage – Both bosses have enrage mechanics if you kill the opposite brother, but to make things easier on yourself, always kill zaven (red mage) first else the room can get filled with fire and it is hard to manage. When Zaven is dead Athor will enrage. The tank should take the boss to the center when zaven was and your dps and healers should find their own space and just gradually burn him down. The mechanics are the same as before, the tank can stand still and block heavy attacks BUT now occasionally Athor will call down a rain of lightning. DO NOT PANIC! running around the room will make you run into incoming effects, keep doing what you are doing, relax, do your damage and if any land near you, simple move a little bit out of the way of them and you will be fine. Careful foot work, not headless chicken mode!

Flame Burst – Periodically Zaven wioll cast a MASSIVE aoe in the room, it will spread and explode. If you are in this you will be knocked down even if blocking. You need to get out of this asap and then get back in position once it is gone. As for the tank, stay out side of this, if you are inside of it and you are knocked down, WHILE Athor is winding up a heavy attack and you accidentally get thrown into a lightning bubble too…you are dead.

Fire Trail – Occasionally Zaven will raise his hand aiming at whoever has agro. This should be the tank but not always. He will cast a striaght line of flames across the ground. So if it is aiming at YOU, simply move to one side and let it pass. If this hits a dps or a healer, it is pretty much a one shot.

The wheel – There are several versions of this for multiple bosses in the game but i always refer to it as “the wheel”. If you can imagine from a birds eye view of a wagon wheel…lots of spokes like the sectioning of a circle, that is how i can best describe this effect. Spokes of flame will fire from the bosses feet. These are low damage, avoidable and not too much of a problem. so just keep your eyes peeled and either avoid them of have a heal to hand. 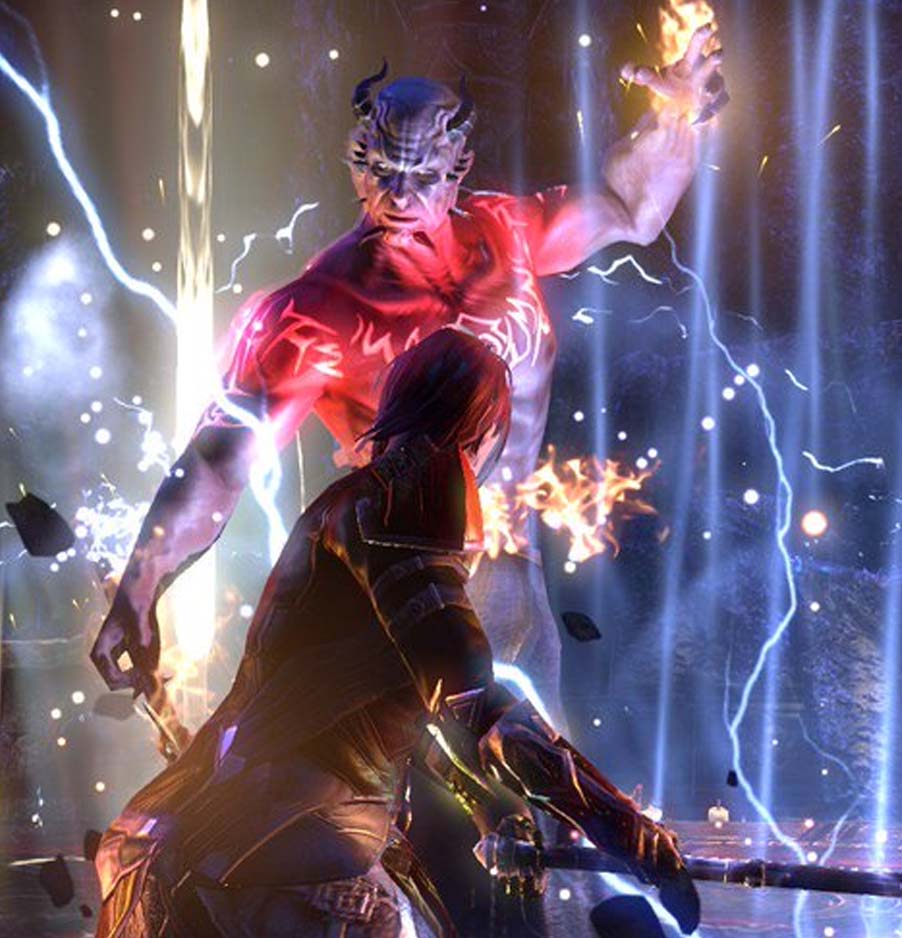 Here is a list of all the loot you can expect to find in Crypt of Hearts I. On normal the loot is blue and the boss does NOT drop a monster helmet, but on veteran difficulty all of the loot is purple and The Ilambris Twins DO drop a special monster helmet. Note Each individual boss can drop a unique item but generally the weapons and jewellery (non named items) come form the last boss) HOWEVER weapons and jewellery and regular loot can also drop from trash and chests, so loot everything!

Shroud of The Lich