In the elder scrolls online people have assumed that a “healer” must be in LIGHT armor. Well this is both FALSE and against the traditional expectation of a healer in MOST fantasy scenarios. There is not a SINGLE light armor passive in the game that boosts healing as a stat. The only one remotely beneficial would be the critical chance bonus but that is only 1% per piece anyway, and it relies on a dice roll not a raw flat bonus. Which is really not that useful at all when you already have a low crit chance and are not building for crit as a rule (which we are not) Our crit is incredibly low so a tiny bonus won’t actually boost us overall and will fail more times than it is useful.

However! medium armor now DOES have a “healing done” bonus along with “spell damage” bonus. BOTH of which DO boost healing! While this is great, where does the heavy come into play? Well the heavy armor improves your survival, compliments a couple of healing abilities in the Templar skill lines by having high health (rune focus for example heals more based on high health), has resistance and recovery bonuses for getting hit and above all…adds 4% extra return from your heavy attack per piece! That’s right, 5x heavy armor pieces boosts your ability to get BACK resources from your heavy attacks by 20% and makes you stronger with NO negative effects towards healing done vs the light armor passives.

Light armor has passives to recovery and reduction to cost but you do NOT want to be spamming as a healer anyway. If you understand your restoration staff passives and utilize them properly,  you will know that Major Mending (16% increase to healing done) is what you get from a heavy attack with a Restoration staff. Which means Heavy first, heal second, will make for MUCH stronger healing.

If we are heavy attacking we don’t need loads of recovery and the heavy armor gives us MORE back for doing so! One heavy attack means BIGGER heals and MORE resources. It’s win win. Not squish, healing boosted, resources maintained!

Overall the potential gain from heavy attacks from a Restoration Staff, using heavy armor during off balance also, is insane. During off balance situations you can get back 30% from Restoration passives, 20% from heavy passives, and 50% from off balance all at once! That’s a LOT of REALLY easy resource management. And if you are not using heavies, then you are not utilizing the strength potential of your heals anyway and doing it wrong. If you want to be a strong healer with a restoration staff, make SURE you heavy attack else you are NOT getting that 16% increase to ALL heals.

So keep it simple… lay down your HOTs (heal over time skills), use the big heals when you need to, and KEEP heavy attacking! Major mending all day long and never run out of resources! And unlike squishy healers, your survival is so high that you don’t have to do back flips and block all day long through trivial mechanics that would normally kill you!

We also have a 1 hand and shield back bar weapon meaning we have more defensive based skills if we need them! Not to mention of course while the Restoration staff does have mending and other passives, we DO have more spell damage on the 1 hand and shield bar to close the gap while not using the Restoration Staff. We have single burst heals and aoe burst heals for any situation and at the same time we ALSO have constant aoe heals so long as you maintain them.

If things go wrong, you are SO powerful that you can take punches while getting people up off the ground. Just remember while resurrecting people you MUST maintain ground HOTs in order to help keep the group alive while you are busy elsewhere. We can pick up a single body on the ground in less than 3 seconds based on our class and Champion points to which is a big plus in emergencies.

The sets we are using massively promote survival for the group with a set that CONSTANTLY stacks damage shields (yes multiple people in the group can use this at once for more stacks) and just for healing, we can constantly keep the enemy’s weapon/spell damage DOWN meaning your group gets hit for less!

So if you want to go back to the old school heavy armor yet MORE than capable healer to really re-live those proper fantasy aesthetics, then look no further because finally it can be done! Your heals are NO weaker than using light armor, and in fact with the two medium we are using as well…ours are STRONGER!

This is a full PVE build and it can be used in ALL content while farming the loot can actually be done on NORMAL! 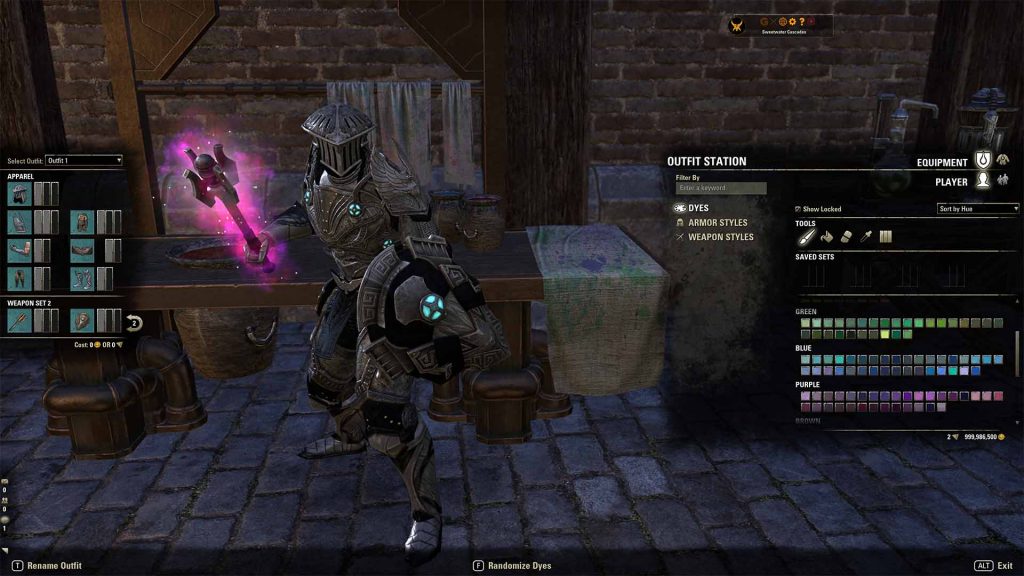 As demonstrated in the video, our fabulous setup and dress choice for this character is as follows:-

The two colors we are using are Legate’s Black and Windhelm Steel.

The NEW Champion Points 2.0 introduced in the Q1 2021 DLC: Flames Of Ambition, is quite possibly the BIGGEST change/addition to The Elder Scrolls Online since One Tamriel! And these were further altered in the Blackwood Chapter, giving us a lower base for capping out some of the essentials and also adding some more slotables!

Before it was a case of “i have limited points as a cap, so HOW should i spend them”? Now that is NOT the case as SUCH! Now, it is a case of, buy ALL the things, but which SLOTABLES should you take?

Everything before was a passive bonus with huge diminished returns, awkward calculations and was messy to all players for the most part. The new system underlines NO diminished returns, no majorly confusing passives and the ability to buy EVERY single passive available for tanking, dps and healing on the SAME character with enough points to spare for buying slotables. Being able to slot 4x special slotables from each tree when there are an abundance of them means you are only limited by your CHOICES not by your CAP.

Buy all the passives, CHOOSE which slotables to take vs the situation, and the rest of the points are spare. Or are they? Well here is the crunch…Once you go over 1800ish (depending on slotable choices, some are more expensive in the craft tree) you basically have every single passive available PLUS 4 slotables per tree…

If you JUST wanted to focus on combat alone (all red and blue passives and 4 slotables for each one) you only actually need 1719cp to be completely maxed in those areas. And if you wanted to just get your flat tanking bonuses out the way nice and quick for slotables alone, you can do that BEFORE 990! it’s really not as bad as it was in the past and this system i much simpler than it ever was with a lot of great situational and build design choices.

So what’s next? Well, if you have higher you can buy more slotables and switch stuff per situation as and when needed. If you don’t, then if you want to swap it will cost you gold for respecing. So in a nutshell, 1650-1800 (depending on build) is you pretty much done! Anything else is convenience due to not needing to spend gold swapping things you already have access to! How cool is that?

The goal is simple. Buy ALL the PASSIVE champion points, that meaning the ones that do not require you to slot anything, they just affect you anyway. MOST of those are prerequisites to some of the others anyway.
While doing this pick 4 slotables for each tree and slot them! Any spare points can be put into extra CHOICE based slotables for “other things”.

No matter what, THESE are the most important parts of the champion points 2.0 system. So this is your main FIRST goal when pushing for the build. You need to slot these even if they are not max level. However there are swap outs for situations as explained in the video.
BLUE are important for resistance, heals and damage. Red are important for resources, health and CC. Green are literally Quality of life! (aka your choice so not THAT important for combat).

What do you do if you are lower cps? Well it is always best to have a goal right? This is going to make you a very strong tank focusing on resistances and such but you DO also want to get those slotables in early. So i’ve set you up a path to get it ALL done at once at a steady pace!

Above is gear cap. So most players do want to know what to do with their points here. So this guide should point you in the right direction to get started with the basics for a good balance across the board for survival. Also unlocking major slotables early on.

TECHNICALLY since we don’t really need any damage as such for the build, you are pretty much done here. BUT it is inevitable that you will get more champion points.

So simply finish off remaining passives up as you go.

All passives a + 4 slotables of your choice!

At 990 you have ALL the basic slotables you need and you have lots of nice minor bonuses for max health and reduction to cost for some standard abilities (dodge, etc). Now it is just a case of specing out the final remaining minor bonuses to damage mitigation and cost reduction in block. So focus on those first and THEN push towards the sneak passive and resurrection passive. They are not so important and expensive so leave them until last!

For maximum potential of healing done you will need to be sure you have major sorcery. So for this you will need spell pots. However, if you have a  Dragonknight in your group already supplying it to everyone, you can use Tri-pots all day long and benefit from 3x resources of recovery rather than just one and still have all the buffs you need!

If you would like to make your own potions, i now have a fully functioning potion maker on the website. Here you can TEST any combination of potion or poison you like and check the outcome without having to know the combinations in game! Check here for the App, working on android and IOS – Potion Maker

We are using the Ritual mundus and we have 64 points into Max Magicka.

We are An Argonian but other races are also usable. Orc, Imperial, High elf, dark elf, or Breton are good substitutes.

If you are VERY experienced and/or can maintain your resources indefinitely you can change the Magicka recovery glyphs for spell dmaage and get even STRONGER healers, but you WILL have to heavy attack a LOT to maintain it.

Remember, your healing over time skills have a duration, DON’T spam them and your resources are a LOT easier to manage.

Heavy attacks are one of the most BASIC skills/mechanics in the game. Understand them, use them, don’t skip the basics just because the cool kids think it is “boring bro”, have fun!