This is the new PVE tank build for the Warden class. He is built around survival and group support with a mixture of popular gear without the need for ANY trial loot whatsoever. This tank is capable of holding agro, taking a serious amount of damage and at the same time capable of buffing and “saving” the group members.

The tank has the usual traditional traits, high health, high magicka recovery (for buffs) but of course, you must heavy attack to be able to sustain.

The high magicka recovery is primarily to keep up the vital warden buffs and have the freedom to throw in a couple of heals if need be. The main buffs are of course lotus blossom (if heavy attacking you heal you or the closest low health ally…we heavy attack a LOT) and of course ice fortress.

Ice fortress gives us minor protection further reducing any damage we take by 5% but also buffs nearby members with major ward and major resolve (almost 6k resists across the board).

This resist buff for the group is the first of its kind in ESO and in my opinion, should have been in the game a LONG time ago, however, we have it now so this has finally added a bit of a game-changer, allowing DPS to not slot the buff because it is already supplied by the Warden, so long as the player keeps the buff up!

Our healing passives/buffs grant minor toughness to whoever is healed by you (10% max HP) and also our ground-based ice attacks are amazing for pinning adds/mobs on the spot to control them while you get all the agro.

Heavy attacks are VITAL but of course, they do come with a price. While heavy attacking, your shield is DOWN, so you take full damage (mitigation buffs considered). With this in mind, you must TIME your attacks. The fact you are taking more damage than if you were blocking means you need more health to take the punch to the face, hence why we have so much HP…BUT the trick with timing is, you MUST block the heavy attacks from a boss.
Heavy attack through normal passive attacks, and then block anything that would one-shot, knockdown, count as a heavy, etc.

In between attacks and abilities, you of course have the freedom to use Bone Shield to protect you and the group (if they take the synergy) if your sustainability is at a high. Above all I cannot stress enough, don’t just block because you CAN…you will run out of juice, block when you MUST!

ICE STAFF.
The ice staff on the back bar is incredible for tanking. Your heavy attacks give you a damage shield AND massive resource return for that type (magicka). Not only that, your taunt ability from the ice staff can actually Immobilize your target! Making for some great double-dipping effects for aggro AND CC!

Your warden’s Winter’s Embrace skill line adds 500 resist per skill slotted so the back bar actually has very high resists even without holding a shield.

Your requirement of slotting ONE destruction staff ability (need one skill slotted for the ice staff to work as intended) adds lots of utility. This means you can slot Wall of Elements for more cc (immobilize/stun enemies), Elemental Drain (magicka return to the group) and even crushing shock (ranged interrupts). Finally the big one, the frost staff works as a sword and board, meaning you can block with it and the passive destro skills actually reduce the amount of damage you take AND the cost of blocking while doing so on that bar…BUT..you block with “magicka!” instead of “stamina!”.

Some valuable points for the build:

Potions really are up to you but they do offer recovery/sustain while giving a burst of stamina/mag/health back at the same time depending on the choice of potion. I would highly recommend using Tripots if you can afford them BUT you can of course use trash magicka or stamina pots depending on how comfortable you are with your resources.

We are using the Ritual Mundus stone for the healing output but if you prefer you can go with the Atronach, and 64 Attribute points into Health.

However, if you are struggling with your sustain you can split the attributes more into stamina, but bear in mind your heals from your procs and all-around shielding for you AND the group will take a hit since everything is based on “max hps”. But whatever suits you best.

We are An Imperial but other races are also usable. Orc, Argonian, or Nord are good substitutes.

Monster Set Choices
As explained in the video there are many options for monster sets. The above is a solid choice for balanced stats and resists but if you want to add more utility then these options below were also noted as possible viable and tested options. 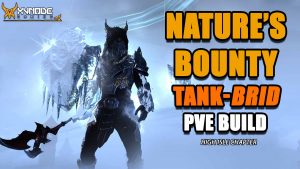 Nature’s Bounty – Warden Tank/DPS Hybrid PVE Build Written guide updated for High Isle DLC: Q2 2022 https://www.youtube.com/watch?v=-uPjPd8OdoI This is the new PVE tank build for the Warden class. He is built to do everything a tank should be able to do…It can taunt, hold agro, survive, control the enemy 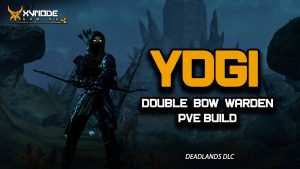 Yogi – Stamina Warden PVE Build Written guide updated for Ascending Tide DLC: Q1 2022 Video is updated for The Deadlands DLC: Update 32 Q4 2021 FINALLY! A strong, sustainable, VIABLE bow/bow build! Many have tried and wondered “can you play using double bow”? YES of course you can but 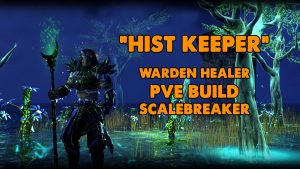 Hist Keeper – Warden Healer PVE Build Written guide updated for Ascending Tide DLC: Q1 2022 Older video but still relevant. This is the new PVE healer build for the Warden class. He is built for healing primarily but at the same time is built for pumping out some SERIOUS