This dungeons you will have access to at level 18 or if you travel to the opening yourself at lower levels.
This is located at the West part of the Shadowfen map as shown below left.
The bosses are marked on the map below right with their names and locations. I shall explain their mechanics as well as what you should and shouldn’t do while facing them. 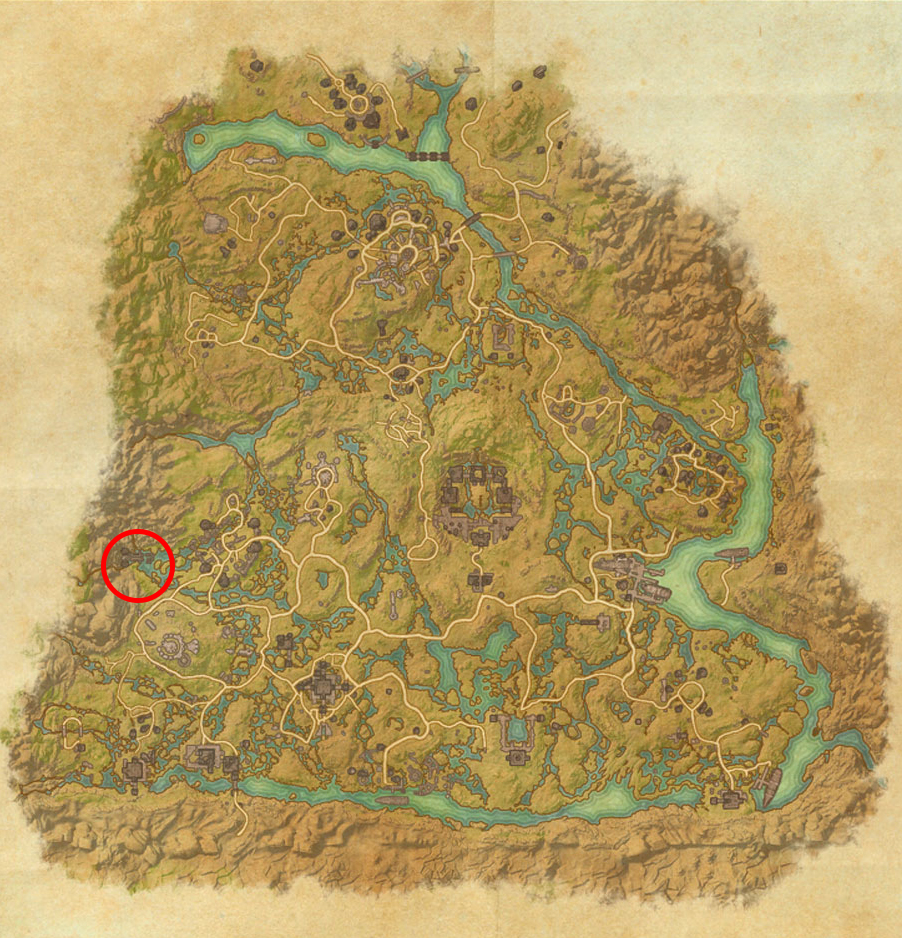 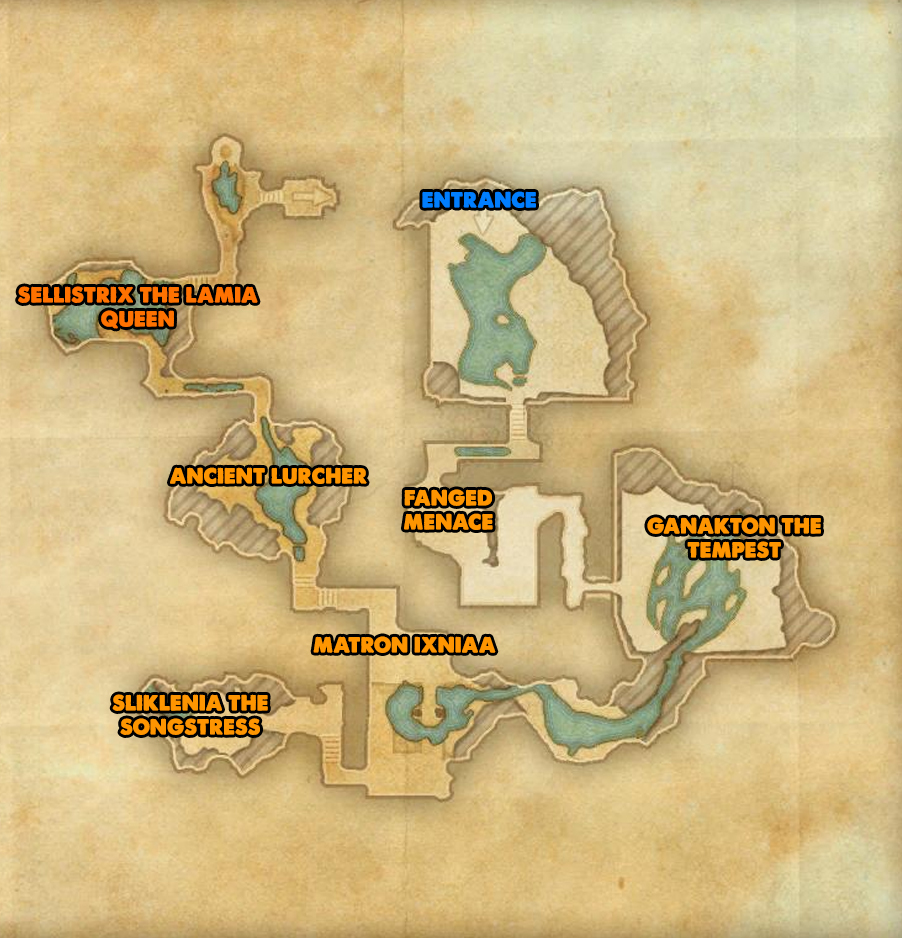 This boss is an INSTANT pug (pick up group) breaker. The mechanics are extremely simple if you understand “don’t stand in stupid” BUT all too often players are constantly frustrated with the lack of attention payed by people thinking they can just yolo. SO the biggest tip for this is, WATCH YOUR FEET!

Lamias – This room is FULL of Lamia type enemies and while the tank needs to keep the attention of the boss he/she ALSO needs to position all of the adds together as soon as possible so that they can be dispatched with as much aoe damage as possible. They do not have a huge amount of health but there are a lot of them. They fire off heavy attacks and abilities/screams that can be interrupted, so everyone should be on their toes. NOTE: do NOT stack the adds on the boss… pull them to one side in case the boss coils.

Whip – This is very large frontal aoe attack where the boss will tail whip in the direction of whoever has  the agro (Should be the tank) If you are inside of this you should either block it, or dodge roll out of it. The simplest way is for the tank to position the boss facing away from the group while the group stay behind to avoid it. If not blocked you WILL be knocked backwards. Before and after this sometimes comes a nasty heavy attack so be careful.

Poison Coil – WATCH YOUR FEET! This mechanic is crucial and requires people to pay attention. The boss will coil up in a ball and a LARGE poison aoe will be placed. I shouldn’t need to tell you to stay out of it since it is clearly going to hurt, however it has a major additional problem… IF you stand inside of it, every tick of poison will HEAL the boss at about 5% per second, which can be a nightmare, stay OUT of the poison. just step back a bit and wait while damaging from range. 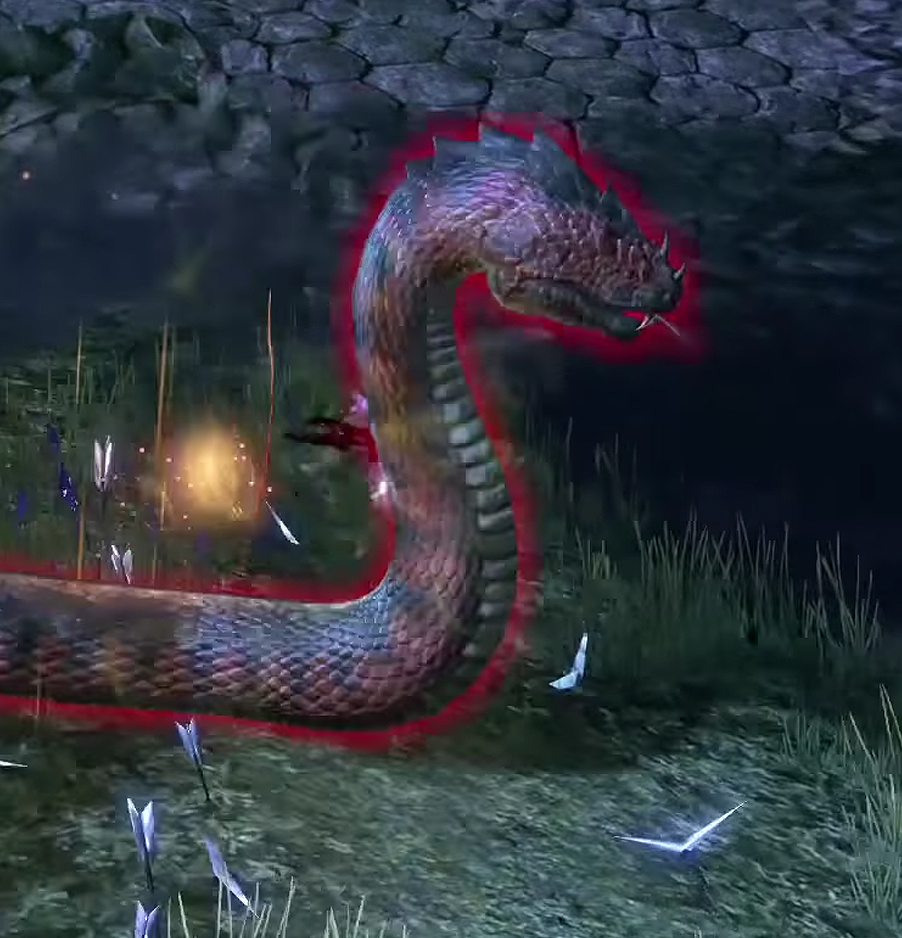 This is very misleading at first because in general you are told in most situations to “kill the adds first”. Well not in this case. She has a pet snake, tip: DON’T kill it. The tank should taunt the boss and leave the snake alone.

Heavy attack – This is where your tank should be blocking (or whoever has agro at the time) if you miss the block she WILL knock you down and it can be a pain as she follows up with some light attacks afterwards. A tank will be less easy to kill but a dps or a healer will probably die. make sure you are blocking this if it is on you. The tank should be turning the boss AWAY from the group to make sure they are not facing her damage anyway.

SCREAM! – A very fun mechanic but above all the reason why you should NOT kill the little snake pet.
During the fight Sliklenia will run to a location and scream constantly doing damage to all players no matter where you are in the room. Do NOT run around like a headless chicken, you will just look stupid and die. What you need to do is follow the mechanic. When She ran to her location, the SNAKE also ran to another location..find the snake, you will see that it is coiled up and created a shield over itself. Get inside the shield and you will take ZERO damage from the scream. You can damage her from inside the shield. Once the screaming is over, get back into position and rinse repeat.

NOTE: after she is dead don’t forget to press the button in the room to lower the drawbridge to the next fight. 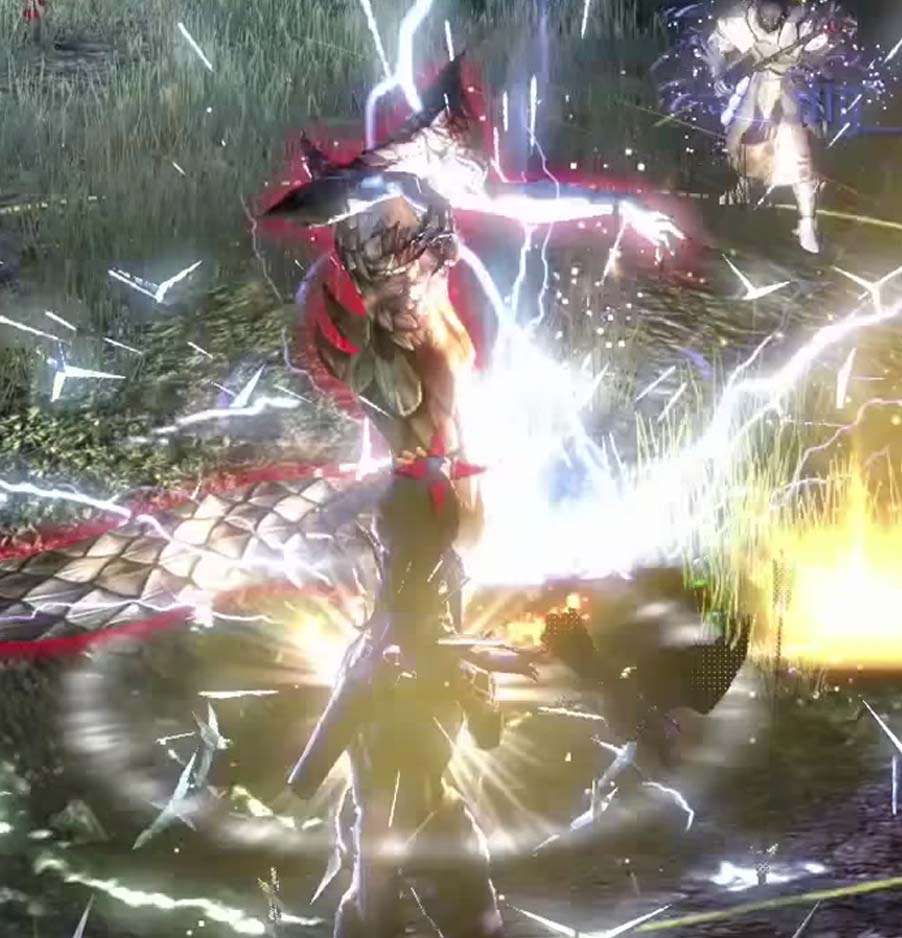 This boss is pretty simple but hits like a TRUCK. She has many additional Lamias along side her and these should all be positioned around/on the boss so they can die to aoe damage. The dpos and healer should spread out for the upcoming mechanics and of course be aware of interrupts. Running around the room will do nothing but kill people, so RELAX!

Heavy Attack – Simple yet effective, you’ve seen them before! Make sure the tank has agro on the boss and this heavy attack coming in should simply be BLOCKED. If you are a dps or a healer and this is on you, same applies, block it. If you don’t it will knock you down and hurt like hell. IF she is on the wrong person do NOT run around the room, she will just kill you in the back of the head. Relax, block and recover.

Double Lightning Splash – Every 10 seconds she will call down a large blast of lightning on a random member of the group. This has 2x aoe circles, one in the middle and a larger one overall, basically one on top of the other. DO NOT stack up. find your own space. If you are hit by the outer aoe you will survive but it WILL hurt. So try to dodge roll or move out of it and then get straight back in again and continue fighting. IF however you are anything BUT the tank and you are caught in the MIDDLE aoe, you have a very high chance to get one shot and die! Do NOT get hit by the middle circle. 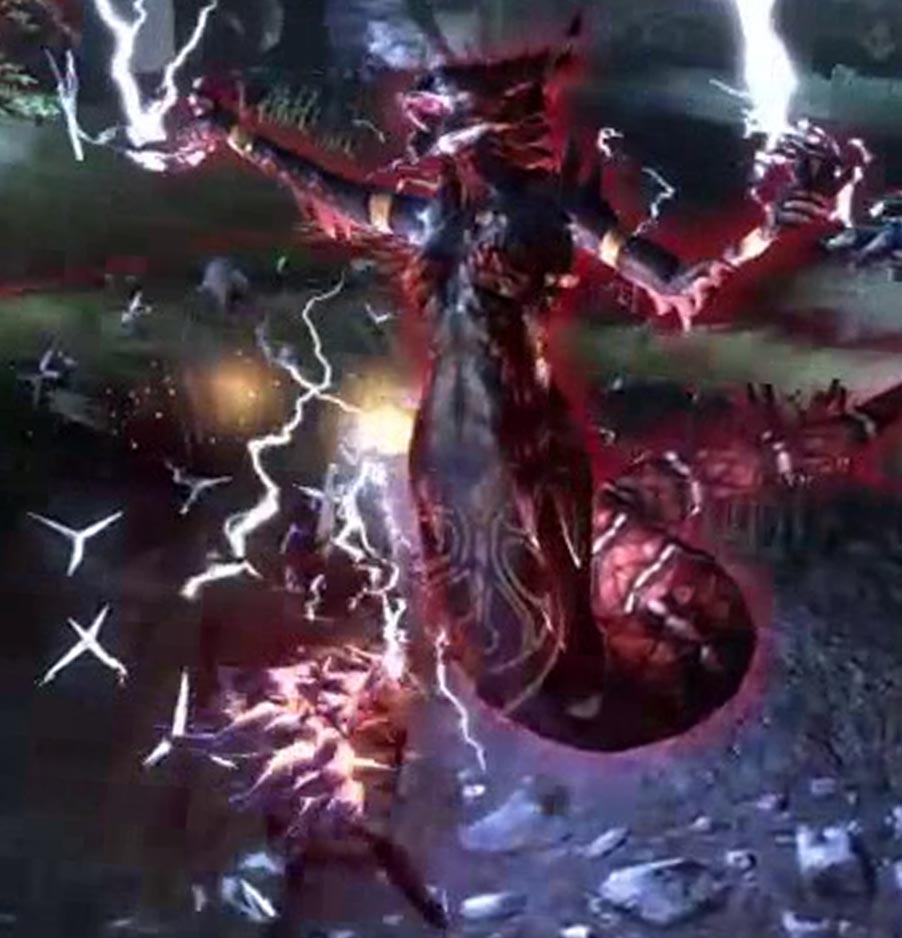 This boss is very similar to the standard lurchers in the dungeon. He has some heavy attacks and basic mechanics that the others have with a couple of alterations. The tank should hold this boss very still and face him AWAY from the group, while pulling in any additional enemies so they can be killed with aoe damage. The group should position themselves in their own space behind/beside the boss to avoid stacking. Pay attention to interrupts and frontal aoe from the adds.

Slam – Basic heavy attack with knockback attached to it. Be sure you BLOCK this if it is on you as it can do quite a lot of damage.

Shake! – Throughout the fight you will notice the boss shaking and throwing ground aoe’s all over, this can be interrupted, so watch your feet if the damage hits the ground and interrupt when you see it.

Beam – Occasionally the boss will put a green beam on a random player draining their life, you must shield/bloc/heal through this as it hurts a LOT!

Enrage – Under 50% health the boss will enrage with a lightning charge. When this happens his ground aoe gets MUCH stronger, so be weary and don’t stand in his face too long. If your healer is on point this shouldn’t be much of a problem but pay attention none the less. 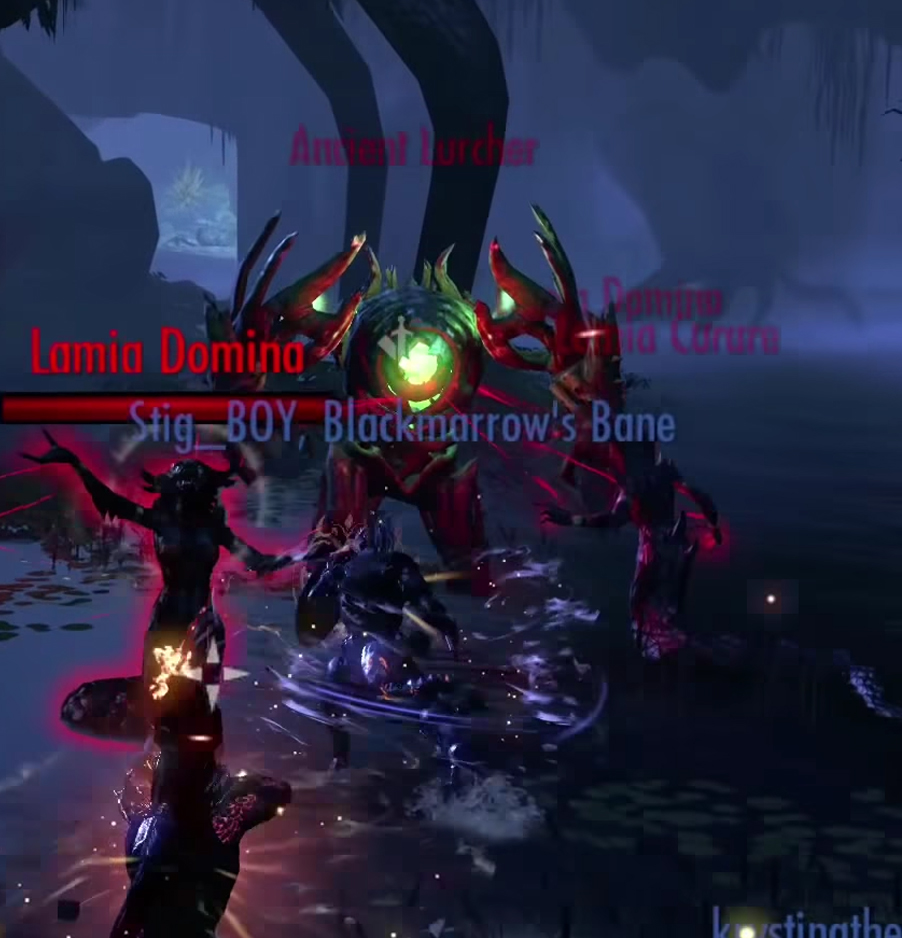 The final boss in Arx Corinium is a tricky one and although there are many ways to do this if you are experienced, there ARE rules that apply to the boss and it can be controlled SIMPLY by following mechanics and pacing the fight. The tank should keep agro at all times but the group should be in a formation that allows them to all have their own space CLOSE to the boss. She will do random attacks and you NEED to see who is being hit.

Channeled Strikes – This is her main attack, she will raise her hands and call down several AOE blasts which do damage over time to certain islands in the area. This is VERY simple if controlled.The tank should hold her ON (yes on not near) one of the islands. When she fires off this ability, everybody get in the water. When it finishes, everyone get back into the fight. KEEP her on the island at ALL times if you want this to be a smooth run.

Heavy attack – Basic heavy attack which can knock down, this MUST be blocked, don’t run around the room, not only will she kill you in the back of the head, WORSE things happen.

Charge – Very often she will attack a random player, so be careful of this, however if you are TOO far away she will charge the player trying to escape. DO NOT run around the room, stay close.

Scream – Sellistrix will scream usually in the direction of the tank BUT pay attention. IF the taunt is dropped and she spins onto one of the group members, she is ALREADY on motion and will scream in the direction she was last standing in when the taunt dropped. This means that she will scream AT a dps and/or healer! This is a devastating attack that most cannot stand up to. Your tank needs to STAY on that taunt, and if this does face you either block and shield while the healer works hard OR try to get out of it by moving/dodge rolling. This does a knock back and will put you off balance so this is VERY dangerous.
NOTE: moving away does NOT mean run around the room, you will kill everyone if she goes rogue.

Damage shield – Sellistrix has a damage shield on her for the majority of the fight which she consistently reapplies. This means direct damage will not critical strike while she has the shield. This makes the fight a bit longer but that is the SAFE way to do it.

Charged water – This is Crucial. IF she touches the water, she will constantly electrocute it. Meaning ANYONE standing in water will take MASSIVE damage every tick and most likely will NOT survive. SO keeping her on the island at all times allows you to never have this mechanic happen and of course mean that you can utilize the water area when the aoes land from Channeled strikes. Hold her STILL!

EXPERIENCED METHOD (note: High risk) – ONLY do this if you are VERY experienced…
Rather than keeping her on the island and moving in and out with the aoe’s to keep it clean(but she has a damage shield) there is a more difficult tactic that can be applied.
“IF” your tank can position the boss so that SHE is in the water, but YOU are all on the island. She will zap the water (meaning you must NOT touch it ever) and remove her own damage shield. This means “crits are IN!”. It is a faster way to kill ger but requires HIGH co-ordination. I would NOT recommend this for new groups but if you can nail it, it is fun and fast. 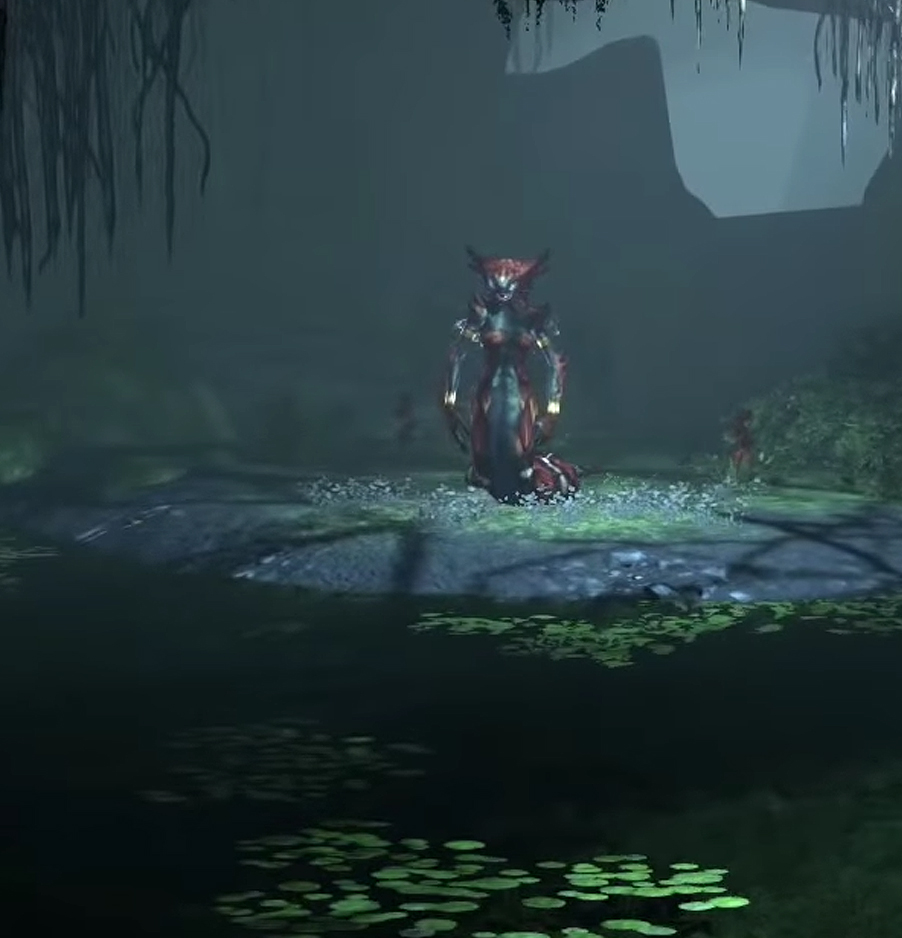 Here is a list of all the loot you can expect to find in Arx Corinium. On normal the loot is blue and the boss does NOT drop a monster helmet, but on veteran difficulty all of the loot is purple and Sellistrix DOES drop a special monster helmet. Note Each individual boss can drop a unique item but generally the weapons and jewellery (non named items) come form the last boss) HOWEVER weapons and jewellery and regular loot can also drop from trash and chests, so loot everything!